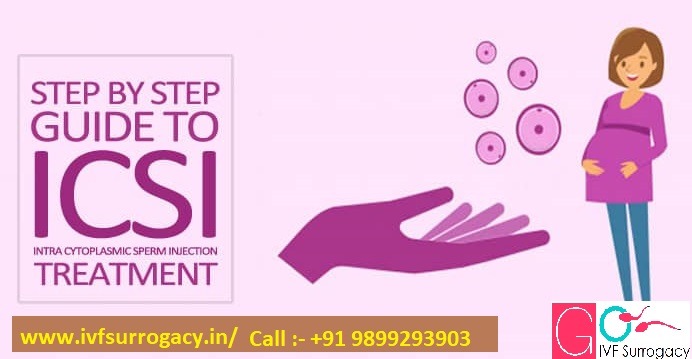 ICSI came into existence in 1992; the first baby via this procedure was born in Belgium. ICSI is one of the techniques in Assisted Reproductive Technology (ART) and can be considered as the extent of the IVF process. ICSI is the procedure where a single sperm is directly injected into the cytoplasm of each egg. ICSI is usually tagged along with IVF treatment. ICSI is the beneficial procedure for those males, who face male infertility such as low sperm count, less mobility of the sperm, and unable to penetrate itself into the egg’s wall. In rare cases of male infertility, there are some men, who are found to be no sperm (or very few) in his ejaculation – during this case, SSR (Surgical Sperm Retrieval) is performed using ICSI method.

ICSI treatment cuts-down the time of fertilization compared to the conventional IVF method. ICSI is the second most advanced fertility treatment, with IVF being the first.

Fertilization in IVF treatment can be achieved in two ways –

A couple, if undergoing standard or traditional IVF, fertilization occurs naturally, where the most motile and active sperm gets penetrated the egg’s wall and goes into the cytoplasm. Here, more than 50,000 sperms are placed next to the eggs for natural fertilization. On the other hand, ICSI requires a unique technique at the time of insemination. During this procedure, a glass needle (called micropipette), is used by the specialist to inject the sperm directly into the egg’s cytoplasm. This process is accomplished by providing stimulatory drugs to the woman. Once the eggs are enough matured, eggs are taken out from the woman’s ovaries and kept in the petri dish. Later on, the step of fertilization is performed, and single sperm is injected into each of the eggs, which has been collected.

There is not such any requirement of the sperms to naturally penetrate with the egg’s wall and reaching the cytoplasm in the case of ICSI. Hence, there is the lessening time in the procedure of ICSI comparative to conventional IVF. ICSI is one of the advanced methods of IVF, but it never gives the assurance of the fertilization being successful. Undeniably, ICSI has a bit increased success rate comparing to IVF but not comes with a guarantee.

ICSI is the acronym of Intracytoplasmic Sperm Injection, which is one of the productive methods of assisted reproductive technology (ART). This technique is used in the case of male infertility. Also, when the male is found to be azoospermic (absent of sperms), sperms are collected using a surgical way, and then via the ICSI method, a single sperm is directly injected into the egg.

With this advancement of the technique, a single sperm is introduced into the egg, which has been obtained during IVF.  Once the sperm gets fused into the egg, later is the formation of Embryo. Experts wait for few days for embryo transfer. Pregnancy is initiated once the embryo gets implanted into the uterus. ICSI gives a high success rate than IVF treatment.

Is there any difference between IVF and ICSI?

There is no such significant difference between IVF and ICSI because each of the procedures is the same, apart from the cost and the system of fertilization. During the conventional IVF, the eggs are just kept with the sperm in the petri dish letting the natural fertilization happen. On the other hand, ICSI takes a speedy step of fertilization. The embryologist inserts a single sperm directly into the egg and insemination takes place. Apart from this step, the rest of the procedure is similar to the IVF. A couple chooses ICSI treatment if the male’s sperm has some abnormality.

As described above, the method, which is used during ICSI, is known as Micromanipulation. In this technique, the embryologists of Go IVF Surrogacy under the inverted microscope are used to choose and pick the sperm, which is motile and normal. The sperms are selected in a special needle.

Once the experts obtain the sperm, the next process is injecting this sperm one by one into the inner part of the egg. The needle is carefully removed after inserting the sperm into the egg’s cytoplasm. Now, these eggs are inspected under the guidance of the fertility team and analyze on which day, the embryo should be transferred into the woman’s uterus. This is all about the process of ICSI.

Since a single sperm is inserted into the egg, ICSI is one of the highly-targeted methods of IVF treatment, providing a good success rate. ICSI technique won’t be an active process, if the female is supposed to be infertile, i.e., if the female comes up with the poor quality of the eggs. If the male’s sperm could not be treated with ICSI, then some other advanced forms of ICSI can be used such as PICSI, IMSI.

previousHow Much Does A Single, FRESH Cycle of IVF Cost ?