Why choose embryo freezing in India?

Embryo Freezing India is possible with us, if you have your stored embryos you can freeze them with us for the later use or you can also donate your frozen embryos to other couples who are looking to have an own baby. Your frozen embryos can help someone in building their family.Embryo Freezing India is done in liquid nitrogen and you can easily transport them from anywhere in the world to our clinic by using a dry shipper. The most important thing that you should keep in your mind is that the cold chain needs to be maintained and it remains cold all the time. 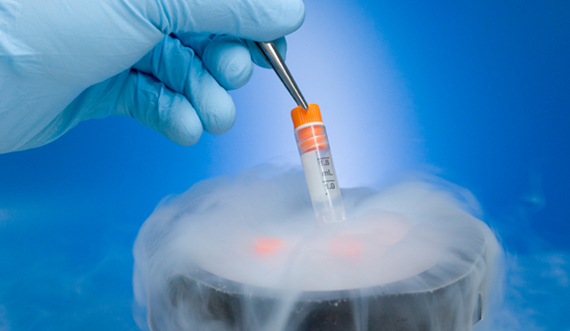 Embryo freezing, or cryopreservation, adds an important dimension to assisted reproduction by

We define embryo survival based on the number of viable cells in an embryo after thawing. An embryo has “survived” if >50% of the cells are viable. We consider an embryo to “partially survive” if < 50% of its cells are viable, and to be “atretic” if all the cells are dead at thaw. Approximately, 65-70% of embryos survive thaw, 10% partially survive, and 20-25% are atretic. Our data suggests that embryos with 100% cell survival are almost as good as embryos never frozen, but only about 30-35% survive in this fashion.

Embryo morphology (appearance of the cells / percentage of fragmentation) is one of the most influential factors for embryo survival. Interestingly, embryos produced from intracytoplasmic sperm injection (ICSI) also seem to survive somewhat better than embryos produced from conventional insemination. The following graph illustrates these points. The embryo grade in the graph goes from worst (3.2) to best (1.0).

Pregnancy rates are similarly affected by complex relationships and like embryo survival only 7-10% of the predictive value can be observed and measured. Age is not a significant factor with frozen embryos but fewer older women have frozen embryos. From the approximately 20 factors reviewed, the most important factors predicting pregnancy rates are the number of surviving embryos transferred, the number of 100% surviving embryos transferred, and the morphology scores of the transferred embryos. The delivered pregnancy rates ranged from 5% (a single poor quality embryo) to 36% (4 high quality embryos) when the cycles from 1987 to 2001 were combined.

Blastocysyt And Embryo Freezing With IVF.

Blastocysts (embryos cultured for 5 days rather than 2-3) are a special case. The embryos are much larger and have special needs with regard to freezing without damage. Many centers have had trouble with blastocyst cryo-survival and pregnancy rates. A new protocol developed in our laboratory and implemented in December 2000 led to a transfer rate of 62% and a 35% pregnancy rate per transfer. This important change now makes blastocyst transfer more appealing since excess blastocysts can be expected to yield pregnancy rates comparable to embryos frozen two to three days after retrieval. 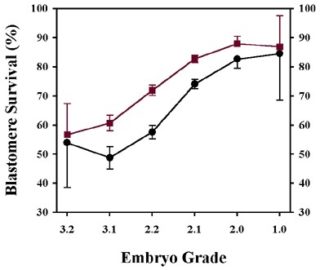 It gives you the choice of utilizing the fetuses as a part of future IVF or ICSI cycles. On the off chance that your treatment should be wiped out after egg gathering (for instance, in the event that you have an awful response to richness drugs), you may at present have the capacity to store your developing lives for future use. In the event that you have a condition, or are confronting medicinal treatment for a condition, that may influence your fruitfulness (fetus solidifying is presently the best path for ladies to save their ripeness). You are at danger of damage or passing (eg, you’re an individual from the Armed Forces who is being conveyed to a battle area). You are because of experience a sex change operation.

We have the best and qualified embryologists who receive the special training to handle the liquid nitrogen and maintaining the embryo frozen bank. The overall estimated Embryo Freezing Cost in India ranges between USD 15,000 to USD 20,000 for one cycle and storing embryo for later use will additionally cost you around USD 5,000 per year. Following are the cases in which couple can choose the embryo freezing:
• If they want to use their leftover embryos from the first cycle for their second attempt.
• If their first attempt has been cancelled after egg retrieval because of no response to fertility medicines.
• If any of your past medical treatments are interrupting your fertility potential

We offer you the best Embryo Freezing Cost India and this will include the cost of monitoring, embryo thaw, embryology fees, transfer, and your first pregnancy test. Additional pregnancy care such as your blood tests, ultrasounds scans and your clinic visits etc. all are covered by the medical fertility insurance. Standard medications are also included in your package; however, if you need more dosage of medication to stimulate your ovaries than your cost of Embryo Freezing India will range between USD 500 to USD 1000.

We also provide the less expensive medication instead of expensive stimulation medication such as you can use estrogen and progesterone which help your uterus to be thick in preparation for the embryo transfer to allow implantation.

Under the pre-Conception and Prenatal Diagnostic Techniques (PCPNDT) Act, 1994, prenatal sex determination is banned in India.

With over 10 years experience and over 10,000+ successful live births through IVF, we are dedicated to hand out best fertility treatment and personalized nursing to accomplish couple’s parenthood soon.