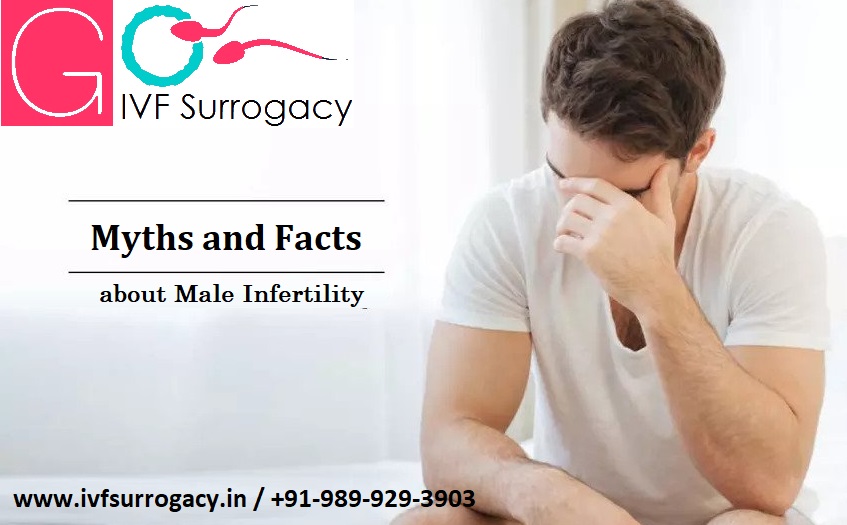 From male member’s low sperm counts to smoking makes a man impotent, the topic of male infertility is rife with myths and half-truths.

There are treatments available to treat male infertility, however, first it is important to break the certain myths related to male infertility and these are as follows:

What to do About Male Infertility?

You need not to worry as the Go IVF Surrogacy has various male infertility treatment options. Depending on your case, you may decide to take medication, explore fertilization options, or consider an egg donor. The following are some common procedures and these are:

a) IVF with ICSI: ICSI is considered to be one of the best male infertility treatments for a person who is undergoing for an IVF. ICSI is a procedure which will boost the IVF success rates and the study says that 75% of the women under age of 35 years who had undergone for the IVF with ICSI procedure have achieved the successful pregnancies. This treatment has bypassed many male infertility problems such as low sperm count, poor quality of sperms, blockage or irreversible vasectomy.

b) Hormone treatment: Your fertility expert will prescribe some fertility drug treatment which helps to correct your hormonal imbalances and also improve the health of your sperm. Clomid is one of the most common drugs which men need to take a pill per day for about three to six months.

Clomid is a powerful drug which helps men pituitary gland to produce luteinizing hormone (LH) and follicle-stimulating hormone (FSH), which communicate with their testicles to produce good quality of sperm.

c) Testicular biopsy, TESA, MESA: With the advancement in medical science men who have few or no sperm in his ejaculate can create genetically-related children. During the IVF with ICSI procedure, your fertility expert will inject a single sperm directly into the women egg to make conception successful; however, if the fertility expert is unable to obtain the sperm from men ejaculate, then they can be surgically withdrawn from the testicle (TESA) or extracted directly from the epididymis (MESA) to make the conception happened.

d) Surgery: When all the other non-surgical procedures are failed to provide a successful outcome then surgery is the only option left to treat the male infertility condition. Surgery can remove the barriers to pregnancy. Following are some examples:

The people from across the globe choose Go IVF Surrogacy because here they get the best male infertility treatment with reasonable cost and also achieve the highest rates of successful conceptions. This is a center where you will get the highly skilled and trained professionals who support you 24*7 and will inform you about your treatment on each stage so that you can take good care of yours and also follow the healthy diet which allows you to fulfill your dream of having an own baby.

In Vitro Fertilization means in the glass that the fertilization should be done in the laboratory dish with the usage of fine quality eggs and sperms that must be done along with the factors in order for the removal of infertility issues.

The first attempt of IVF on an average takes about 6 to 8 weeks to be completed as from the recommended treatment and medication till the transferring of embryos to the female’s uterus. Let us discuss the weekly cycle in detail: –

Week 1: – Prescriptions by the experts

In some of the cases, the treatment should be required with such aspect because of the stress and the hurdles that are because of the workload in the organization and the busy schedule as per the day to day uncomfortable with the work pressure and then which in turn may lead to courageous acquisitions which leads to infertility and towards the most significant opportunity for the treatment of infertility that starts with day 1 consultation and till the medication, it may cover the whole week.

And the medications that are being prescribed by the fertility experts should assess diagnosis with such a process that is more or less assessed within such a scenario to be over with the consultation option and a sound planning and progressions that is to be needed with the informed counseling and the maximize stress reduction process is to be explained by the consultant who is more or less accelerates with the IVF treatment and fertility program to be done with greater explorations dealing with the a financed and comfortable procedure that if the couple is not affording such a treatment than in such a case the financial supporter relative with the fertility insurance and other financial support should be chosen.

With such a weekly process, the treatment planning should be assessed and sorted as the doctor should prescribe for many tests that are needed before the treatment should be started. The tests include:-

Week 5 to 6: – Start taking the medicines

But once the process regarding medications should be over than the female should be monitored well by the doctor and the expert should keep a close eye over the whole process before and after the medication procedure should be over.

Week 7 to 8: – Injections, egg retrieval and the fertilization process

After the days passed on, the fertility treatment should be monitored well and now the time to make the treatment sophisticated for the best result and the positive outcome.

Egg retrieval needs an injection so that the eggs should be retrieved out of the ovaries directly after using the fine quality needle which is being inserted in the ovaries and then the eggs should be extracted out of the female’s body. On the same day, sperms semen should be taken by the doctor as on the day of egg retrieval so that the combination of both the elements should be taken in order to complete the procedure of fertilization.

After the combination of both the elements should be completed then the fertilization should take place in order to obtain the embryos within the laboratory dish. Then they formed embryos should be transferred in the female’s uterus after 2 to 3 days of the completion of the fertilization process.

After the IVF Process to be completed

After the process of IVF treatment to be completed, then there should be 2 pregnancy tests that are being conducted within the clinic.

The issues of sterility can be removed with the help of medicines, Assisted Reproductive Technique (ART) and IUI treatments are the best suitable for such sterility relative issues to be removed from root to tip.

IUI treatment is the artificial technique that is used to inject sperms into the uterus with the help of a catheter.

Female infertility can be caused due to ovarian issues like if the female is not able to ovulate the eggs or the minimum quality of eggs is ovulated by the female and by the blockage found in Fallopian tubes.

Ovulation problems or issues can be because of: –

Blockage found in the Fallopian Tubes is another relative issue of female sterility: –

Male sterility is due to following reasons: –

Under the pre-Conception and Prenatal Diagnostic Techniques (PCPNDT) Act, 1994, prenatal sex determination is banned in India.

With over 10 years experience and over 10,000+ successful live births through IVF, we are dedicated to hand out best fertility treatment and personalized nursing to accomplish couple’s parenthood soon.